Week 17: Provenance and the Individual Book in the Digital Age

Another chapter down.  This one was on reception and readership and – combined with some very exciting plans for a new project which I’ve been cooking up with a friend down south – it’s been making me think about provenance and book ownership even more than usual.

“[People] care about what makes a book unique“

A year or so ago I was talking to a book collector about the ways in which digitisation had affected collecting.  “People care more about provenance now”, he said, “they care about what makes a book unique“.  That’s very true.  When we can download a PDF of many an early printed book from Google in a matter of minutes, the printed text begins to recede into the background as a collectible object in favour of – to borrow a phrase from the Material Evidence in Incunabula project – the “copy specific, post-production evidence and provenance information”.  This has a knock-on effect for us academics as well; only look at the number of new projects focusing on the study of historic libraries, the investigation and recording of material evidence, and the renewed interest in bindings and other facets of the book as physical artefact.

This is an altogether good thing (as long as we don’t begin to neglect the printed book itself!).  It also represents a larger sea-change in collecting.  While celebrity autograph albums and the like were widely popular in the nineteenth century, there was much less interest in the post-production aspects of most books, even to the extent of incunables and other desirable items being “washed” to remove those untidy humanist scribbles (*weep*).  Now that provenance is such a hot topic, bibliographically speaking, not only are we seeking to understand it more from a scholarly point of view, it’s also changing things as basic as how early printed books are catalogued.

The beauty about provenance from a collector’s standpoint is that it’s a great leveler.  Not every wouldbe book collector can own a shelf of incunables, but anyone with patience and knowledge can find books with wonderful histories inscribed in them.  All of the following were picked up in charity bookshops, library book sales, etc., rarely for more than a tenner at most:

This delightful example of early twentieth-century literary criticism contains the stamp and bookplate of one of Fife’s early public libraries, established in Kirkcaldy by the Beveridges – local linoleum magnates – in 1895.  The bookplate, rather forbiddingly, reminds prospective users that “The Librarian is authorised to levy exemplary fines upon readers damaging books”. 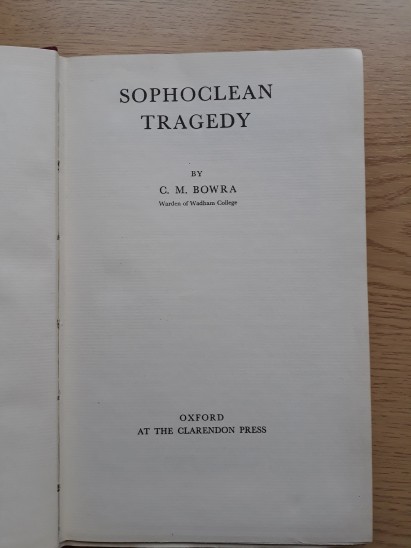 This monograph by the inimitable Maurice Bowra contains extensive annotations on almost every page, apparently by its former owner, Nigerian colonial administrator and poet Charles Ashbee Woodhouse, whose 1948 signature appears on the flyleaf. 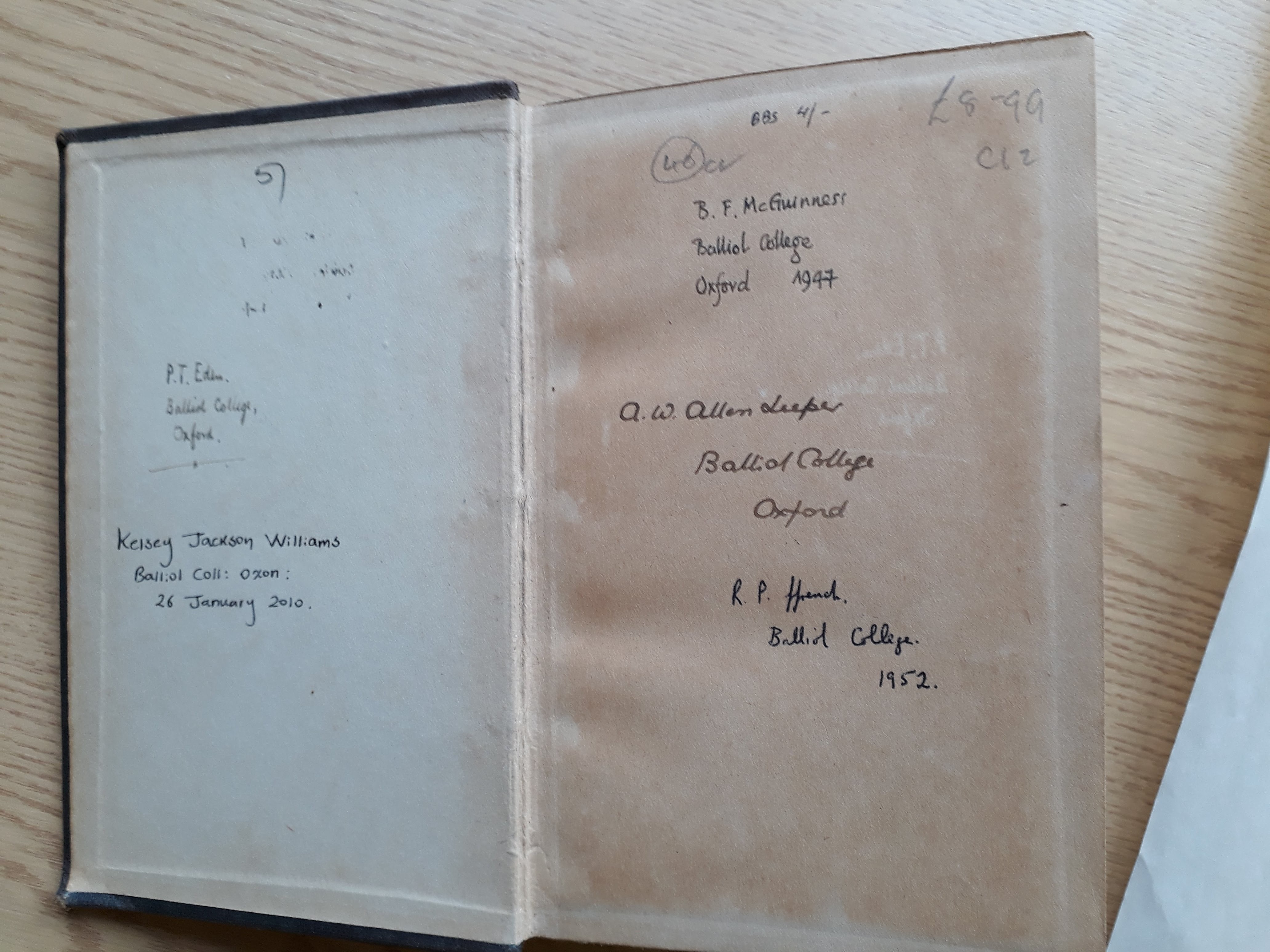 When I was a postgraduate, old Teubner editions of the classics could be found in every Oxford bookshop, but this volume, with its successive Balliol owners is a particularly lovely example of the university book trade.  It has been interleaved to facilitate note-taking, though most of its readers seem to have given up long before the end.

Of its owners, Alexander Wigram Allen Leeper (1887-1935), who probably purchased it new and was responsible for the interleaving, was an Australian civil servant and authority on cuneiform texts.  Bernard Francis (Brian) McGuinness (b. 1927) is a retired philosophy don and authority on Wittgenstein.  Richard Patrick ffrench (1929-2010) was an ornithologist who studied the birds of Trinidad and Tobago. 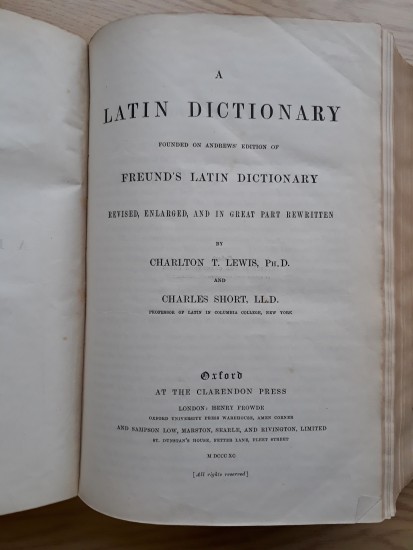 The Historian reminds me that the Oxford Latin Dictionary is better, but I retain a fondness for Lewis and Short, especially this rather touching volume.  Ralph Porter Wade (1883-1939) purchased his dictionary at the precocious age of sixteen before going on to be Gell Hebrew Prizeman at Christ’s College, Cambridge, and a vicar in Lincolnshire, while Edwin Lisle Marsden (1886-1950) was another northern cleric.  From there it went to Eton and finally made its way to the Classics Bookshop in Oxford.

All of which goes to say that provenance research needn’t be limited to scholars of incunables or wealthy industrialists gloating over their Gutenberg Bibles (if this latter, endangered species still exists).  The next time you’re in a charity shop or used bookstore, glance over a flyleaf or two and see what you discover . . . .

One response to “Week 17: Provenance and the Individual Book in the Digital Age”