One chapter of my new book is devoted to the reception of the historical-antiquarian works I study. As part of that I’ve been putting together a sprawling spreadsheet of the 4,000 or so persons known to have subscribed for scholarly texts published in Edinburgh between 1708 (when publication by subscription seems to have first been used by a Scottish printer) and 1740. This sort of data entry is not a glamorous exercise, by any means, but the reward of being able to see who cared about what book and when is well worth it.

Many heavy subscribers are unsurprising. David Freebairn the bookseller appears regularly, as do wealthy collectors like the Earls of Dundonald and Forfar or learned ones like Duncan Forbes of Culloden and James Erskine of Grange. Sometimes, though, you come across less familiar faces and it’s the reconstruction of their habits and contexts I’ve found most rewarding.

One name which appears on seven different subscription lists between 1708 and 1728, the heart of my period of study, is “Mr. David Drummond, Advocate”.

“Mr. David Drummond, Advocate”, situated within a bevy of Drummonds who subscribed to the second volume of George Mackenzie’s Lives and Characters of the Most Eminent Writers of the Scots Nation in 1711.

Drummond’s subscription history begins with volumes 1 and 2 of Mackenzie’s Lives and Characters (1708, 1711), continues with the two volumes of the Catholic historian Patrick Abercromby’s Martial Atchievements of the Scots Nation (1711, 1715), returns to the third and final volume of Mackenzie’s work (1722), and finishes off with James Freebairn’s translation of The Life of Mary Stewart, Queen of Scotland and France (1725) and a new edition of Robert Lindsay of Pitscottie’s History of Scotland (1728). Altogether, solid evidence of a man fascinated by the history of his country.

But who was Drummond? What sort of person was reading these books? The son of a minister, Drummond was a Jacobite and was imprisoned in the Edinburgh Tolbooth for “some time” beginning in December 1689. It may even have been during this imprisonment that he prepared a scribal copy of his cousin Viscount Strathallan’s genealogy of the Drummonds, early evidence of his historical interests. Although described as an advocate in the subscription lists, he had ceased to practice after refusing to take the Oaths of Loyalty to the Williamite regime, instead serving as treasurer to the Bank of Scotland and assisting in the management of the estates of his exiled kinsman, the arch-Jacobite Earl of Perth. 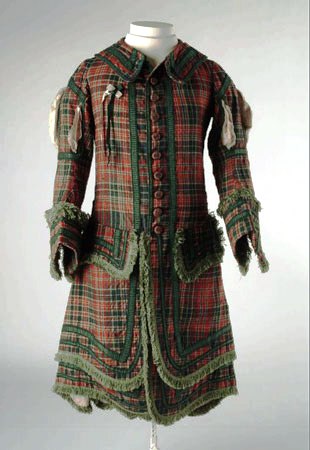 The rather dashing uniform of the Royal Company of Archers, of which Drummond was a member (Wikipedia, Public Domain).

Drummond was also a friend of the Episcopal, Jacobite poet Archibald Pitcairne, who addressed several poems to him, as well being acquainted with Allan Ramsay and the other poets and gentlemen associated with the Royal Company of Archers, of which Drummond served as president in the fateful year of 1715. He died in February 1740, still treasurer of the Bank of Scotland, and left behind a son who he had sent to my own alma mater of Balliol College, Oxford, as a Snell Exhibitioner in 1717 (strongly suggesting the family were Episcopalians).

On the one hand, a two-paragraph biography such as this one may seem like pretty thin soup on which to sup. But on the other, even these fragments can tell us a great detail. They reveal a man who was at the heart of early Enlightenment Scottish culture, with links to poets, historians, and politicians whose contributions defined Scotland in this period. In many ways, Drummond represents the revisionary image of early eighteenth-century Scotland which my new book will be arguing for: Episcopal, Jacobite, well-educated, with links to the north of Scotland, and deeply fascinated by his country’s past.  The pleasure and the reward of working through the subscription lists I mentioned above lies in the snapshots they offer of people like Drummond: a forgotten reading public who devoured the publications I study.

This afternoon I found myself filling out paperwork with a lighter mood than usually attends such activities.  Why?  I was writing the course description for a new fourth-year module I’ve been wanting to teach for a very long time: Scottish literature from Renaissance to Enlightenment.  My own exposure to the period as an undergraduate was one delightful week on the Makars in the midst of an otherwise uneventful medieval survey course and I’ve been keen to do everything I can to create a module which is both accessible and fully representative of the amazing texts produced by Scots during this period so that my own students won’t have to rely upon fortuitous library forays to discover Arthur Johnston or William Drummond or Elizabeth Melville.

The wishing is easy, the doing, I’ve found, is rather more difficult, although not for the reasons I initially thought.  When I first began designing the module I anticipated that the main problem would be access to texts.  After all, there was no Norton Anthology of Scottish Literature to provide a single easy-access core text.  Instead, the authors I wanted to teach were scattered across a wide variety of obscure and expensive editions, most of which were almost certainly not held by the local university library, and much as I liked and respected Jack and Rozendaal’s Mercat Anthology of Early Scottish Literature, I wanted to run a course with different emphases and different writers than their work allowed for. 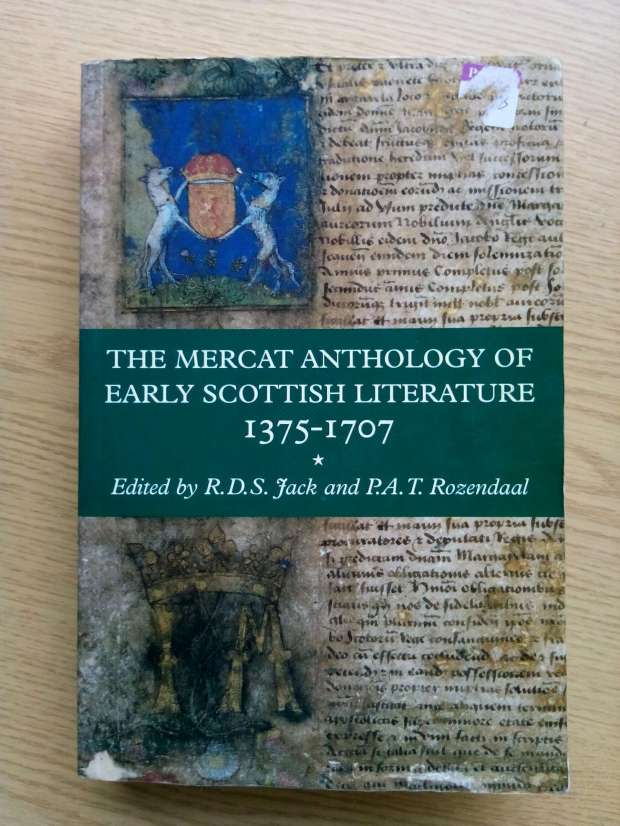 My own – by now rather battered – copy of the Mercat Anthology.

I really needn’t have worried.  The funny thing about early modern Scottish literature is that the vast majority of standard editions were published in the nineteenth or early twentieth centuries.  That’s a problem in and of itself, as I’ve pointed out elsewhere, but it’s also an advantage: most of the authors I wanted to teach existed in at least reasonably decent critical editions which were long since out of copyright and available on archive.org or Google Books.  Beyond that, the National Library’s outstanding Publications by Scottish Clubs digitisation project has made a wealth of valuable teaching material freely accessible.  With the Scottish Text Society’s publications open access through the 1940s, I could count on good editions of Drummond, Alexander, Montgomerie, Mure, Stewart of Baldynneis, the Maitland Manuscripts, the Bannatyne Manuscript, and a host of others.

The iconic maroon and green covers of the old STS publications.  Also the iconic red rot on the spines!

In the end, the difficulty lay not in securing editions of the texts, but in finding ways of making those texts accessible to my students.  Early modern Scotland was a nation of four languages – Scots, Gaelic, Latin, and English – of which I’ll be lucky if my students speak two (to be fair, I have more Scots speakers in my classes at Stirling than at some of my previous institutions, so I can’t complain too much).  The problem I came up against was negotiating the process of finding decent translations or – for Scots material – finding ways of glossing and making accessible texts which would otherwise be a challenge even for the most determined student.  Jeremy Smith’s Older Scots: A Linguistic Reader will be one crucial tool for making the teaching of older Scots a reality, but I’m still not satisfied with the options available for teaching sources originally in Gaelic and Latin. 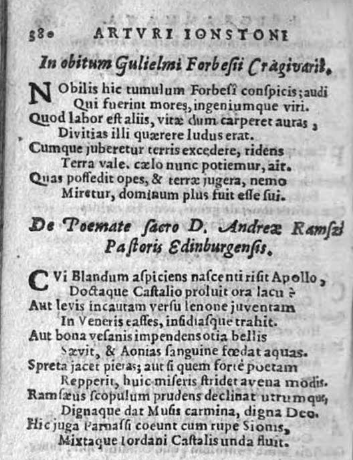 Even the work of Arthur Johnston, one of Scotland’s best Latin poets, is not yet available in a satisfactory English translation (text here from his Poemata Omnia, published at Middelburg in 1642).

Ultimately, I suppose it comes back to the question of canonicity and the canon-industry which I discussed last month.  The apparatus simply isn’t there to do everything I’d like to do.  Still, I plan to do what I can.  Older Scottish literature is becoming more accessible every year and I’m looking forward to making the most of that access by opening up for my students at least a selection of the wonderful texts which were produced in this period.  If even one comes away with a new-found love for the rhythm and flavour of Dunbar or Buchanan or Màiri nighean Alasdair Ruaidh, that will be victory enough.

Kelsey is a lecturer in early modern literature at the University of Stirling with research interests in the culture of early modern northern Europe, especially Scotland. You can find out more here.